June 12, 2017 - Because of the popularity of this blog entry, we've enhanced it with even more historical data.  Enjoy!

While touring Detroit's Eastside, I decided to take Alter Road south until it ends at the Detroit River.  I found myself paralleling an old canal, eventually using a sharply curving bridge to cross it.  The change in direction placed me parallel to the Detroit river, forced me to pass an abandon marina and ended my journey inside Riverfront-Lakewood Park. 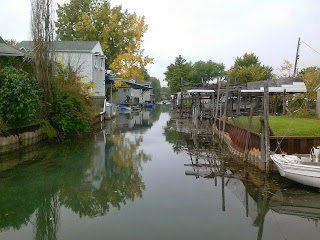 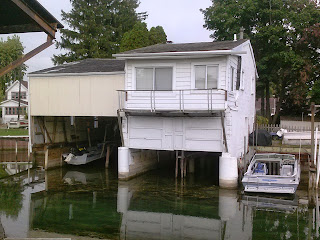 What I discovered was a community where canals and streets are equally woven into the neighborhood's fabric.  Like Venice, I found homes with garages that were made for parking a car just as easy as for parking a boat. I found a place where kayaking to the corner store was easier then getting there by car.  I found a community deeply connected to Detroit's maritime roots.  It's a place where the ease of picturing its past beauty is equaled by the ease of picturing its redevelopment potential. 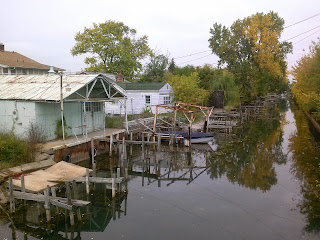 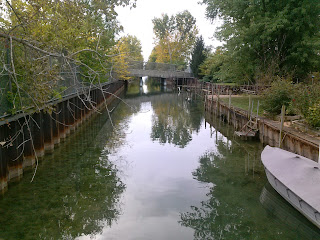 
Burying myself in research, I emerged with a new understanding of how this unique area of Detroit came to be.  I hope you find the timeline below enlightening and use it to also discover a part of Detroit that many have forgotten.

- In 1669, Frenchman Adrien Joilet canoes the Straits of Detroit making him a candidate for being the first non-native to travel through the straits.

- In 1679 the first ship, The Griffon, reaches the mouth of the Detroit River.

- In 1701, Antoine de la Mothe Cadillac steps ashore at what is today Hart Plaza and founds the City of Detroit. He's accompanied by 50 settlers and 50 soldiers. Fort Pontchartrain begins construction.

- In 1712, A group of Native Americans (comprised of Fox, Outagamie and Mascoutin tribes) travel south and lay siege to Fort Ponchartrain.  The siege fails after 5 days.  They retreat to place near what is today Mariner's Park and the location of Windmill Lighthouse. The French and their Native American allies counter attack and massacre over 1000 Native American warriors over 6 days.  The nearby creek becomes known as the Fox Creek.


- French ribbon farms run perpendicular from the Detroit river and across the Fox Creek.  Present day street names reflect the farm owners: Moran, Holbrook, Alter.  The farms were located on marsh lands known as the Grand Marais (the Great Swamp).

- Mud makes Jefferson Avenue particularly difficult to travel by horse.  In 1851, private investors are allowed to cover the road between Detroit and Grosse Pointe in planks in return for charging tolls.  Now privately controlled, a toll is collected to pass over the Fox Creek bridge.

-A portion of the original plank road, known as Hull's Trace, is visible today between Monroe and Trenton off of US Turnpike Road.

- In 1876, a road was built from Jefferson Avenue to the Windmill Lighthouse and the lighthouse was rebuilt to meet the increased traffic along the Detroit river.

- In 1880, the Wayne County Drain Commission authorizes the conversion of Fox Creek to a canal.

- In 1891, the Jefferson Avenue Railway between Detroit and Grosse Pointe opens.  That same year,  range towers are constructed near Windmill Lighthouse to guide ships traveling down the Detroit River channel.

﻿
- In 1892, Mayor Hazen Pingree leads a campaign to remove tolls along travel routes between Detroit and Grosse Pointe.  By 1896, most of the tolls are removed.

- In 1903, the Village of Fairfield incorporates inorder to petition the Township for funds to pave Jefferson avenue.  After a lawsuit, Fairview wins funding.

- In 1906, Jefferson Avenue is paved in bricks and the Fox and Conner Creek bridges are rebuilt. Tolls are removed.

- In 1907, the City of Detroit begins the process of annexing the Village of Fairview amid concern that sewage dumped into the Fox Creek will contaminate the quality of the City's drinking water. Legislation is written and delivered to Lansing in early 1907.  An error in the bill's wording allows Detroit to annex only 2/3rds of Fairview (to Wayburn/Alter).  In May 1907, Grosse Pointe Park quickly forms between Grosse Pointe and the new Detroit border preventing the correction of the error.  In October 2017, Detroit completes the annexation of the remaining portion of Fairview.

- In 1907, the range towers guiding ships along the Detroit River are rebuilt using steel.

- During the 1920s, the community of boathouses and house boats along the Fox Creek Canal at Klenk and Harbor Island continues to grow.

- In 1925, the Fox Creek canal is built.  It runs from the Detroit River to a point north of Jefferson Avenue where the canal flows into underground pipes that run under Jefferson Avenue.

- In 1930, the Fox Creek Backwater gates are built at Jefferson Avenue near Ashland Street to alleviate flooding problems along Ashland Street.  The gates funnel water to an underground sewer which connects to the Connor Creek pumping station.  The design captures storm water north of Jefferson Avenue before it flows south flooding areas adjacent the Fox Creek Canal and the Detroit River.  The gates also forces water from the river to flow towards Jefferson Avenue so that it can be used to flush the new underground sewer.

- During prohibition, a period which would last from 1917 to 1933, Michigan becomes the primary entry of illegal alcohol.  75% of all illegal alcohol entering the US comes through Michigan.  This area along the Fox Creek Canal becomes one of many smuggling points.

- In 1930, the ship guiding range lights are removed and a new 125 bed US Marine hospital is built at present day Mariner's Park.  In order to expand the land area, the City of Detroit's Engineering Department fills in submerged portions of the site.
﻿
- In 1933, the lighthouse is again torn down and the present standing Windmill Lighthouse is built.

- In the 1940s, using US government incentives to create housing for veterans returning home from the war, Lakeside Trailer Court opens adjacent to the hospital and lighthouse.

The four-engine delta-winged plane was on a training mission, flying from Lincolnshire, England, to Lincoln, Neb.  Crippled, it dived from 45,000 feet, passing over hospitals and schools on its path to the ground. The impact was so hard that searchers dug 70 feet in an unsuccessful effort to find the plane's cockpit.  The largest piece of wreckage found was a 6-foot section of wing that landed on a porch.

- During the 1960s as racial tensions increase, Alter Road becomes a symbolic dividing line between the majority African-American City of Detroit and majority White Grosse Pointe Park.  Physical barriers are built at cross streets preventing traffic from crossing the border.

﻿
- After being converted to a clinic in 1969, the hospital was closed in 1981 with the reorganization of  the US Public Health Service into the Department of Health and Human Services.

- In 1982, the hospital grounds were deeded to the City of Detroit and Marina Park opened.

- In 2004, the Lakeside Trailer Court closes in preparation for a proposed high-end housing development known as "The Point at Belle Harbor".  The development never comes to fruition.

-In 2013, the land for "The Point at Belle Harbor" (and the former location of Lakeside Trailer Court) is placed on sale for $3.9 million dollars.  The property includes 400 feet of waterfront and 800 feet of canal frontage.