﻿It seems incredible, but buried in an overgrown, under maintained Detroit park, sits a velodrome.  Quoting from the Merriam-Webster Dictionary, velodrome comes from the French word vélodrome meaning a track designed for cycle racing.  As an amateur cyclist, I couldn't believe what I had stumbled upon in the middle of one of the most blighted neighborhoods in Detroit. Sure, I'd watched a few cycle races during the Olympics trying to comprehend the sports unique strategies and incredible speeds.  But to set foot in an actual velodrome?  If I didn't have pictures I wouldn't believe it.  Here, at the corner of Mound Road and Outer Drive, sits a velodrome with a history for having trained some of our nation's most distinguished cyclist.  Names that include Frankie Andreu, former 7-Eleven and U.S. Postal Service racer and two-time Olympian John Vande Velde.

﻿
Built by Michael Walden, a legendary cycling and track coach, it was completed the same day that Neil Armstrong set foot on the moon in 1969.  It was built on land donated by the Chrysler Corporation whose 35 acre assembly plant looms just a few wheel rotations across Mound Road.  The land is part of Dorais Park, which because it contains one of the city's few hills, was site for Detroit's 1956 soap box derby and some of the city's best winter sledding.  It's named after former University of Detroit Mercy football coach Charles "Gus" Dorais, a member of the college football hall of fame.

250 meters around with 45-degree banks and a concrete surface, it was home to the 1969 U.S. National Track Championships.  For 21 years it would serve its purpose as a world class training facility. But it would host its last race, the Michigan State Championship, in the summer of 1990. 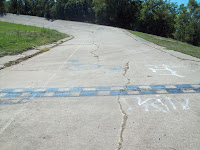 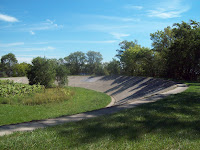 A group of good Samaritans known as the "Mower Gang" rediscovered the track in 2010.  Though the concrete racing surface is cracked, and littered with graffiti, racing returned to the Dorais Park Velodrome on October 16, 2010.  For a brief moment, racers circled the track on small motorcycles, mopeds and bicycles, bringing the dormant spirit of the Velodrome back to life.  Time will only determine how long the track's renaissance will continue.