From the Detroit Bungalow to the Ashanti Traditional Home


The old cities of the northeast are filled with dense housing. For Philadelphia, New York, Boston, Baltimore, the row house is king. The row house is the prototypical housing type, where homes are packed so densely that they share walls, known as party walls, on two sides. This is where I grew up. It goes without saying that with this kind of housing, especially where party walls are only a single wythe thick, one develops a special relationship with one's neighbor. Details like when their alarm clock goes off, what their favorite television program is and what they're cooking for dinner are no longer mysteries, but shared experiences. As a kid, I imagined cutting a hole and exchanging notes with my best friend.﻿


But when I arrived in Detroit, I found the prototypical housing to be very different. The streets were wide and spacious and they accommodated on street parking. There were no row houses. In fact, the typical Detroit home sits detached obstinately avoiding the touch of its adjacent neighbors. Sitting on 30' wide lots, narrow swaths of land buffer the space between houses. It amazed me how wide open Detroit's neighborhoods were. In fact, years later, it filled me with pride, as my wife and I moved into our first house, that the walls could only be touched by us. It's this spaciousness that exacerbates the 25 square miles of land that sit vacant in Detroit. Back east, density reduced the vacantness accumulated by home abandonment. ﻿﻿


But at the turn of the century, Detroit built upon the health and environmental lessons learned from the dense cities built back east. Combined with the freedom of the automobile, and the availability of middle class wages, Detroit was destined to be place to earn a piece of the American dream (though for African-Americans the dreams had limits.  See the stories of  Dr. Ossian Sweet and Orsel and Minnie McGhee). Prominently standing in the center of this dream is a single detached house surrounded by a green lawn, a white picket fence and occupied by 2-1/2 kids. Thus, to make dreams come true, Detroit became dominated by two housing types: the Detroit Bungalow and the American Four Square.

The American Four Square was a home you could literally order from a catalog. Sears and Roebucks, Co. offered the dream for $1,995.00 plus shipping in its 1908 catalog. Its layout is, as its name implies, in a square. Typically 2-1/2 stories high, it usually includes four large, boxy rooms to a floor, a center dormer, and a large front porch with a wide stairs. Other common features include a hipped roof, arched entries between common rooms, built-in cabinetry, and Craftsman-style woodwork. Character was created by dressing the home in an architectural style like Tudor, Prairie, Queen Anne or Craftsman.


Detroit Bungalows were typically built in the Craftsman architectural style. They are typically 1-1/2 stories, with sweeping low pitched gabled or hipped roofs that extend over a front porch that matches the width of the home. The first floor is typically raised a half story to allow for perimeter windows to bring light into a full basement. Dormers bring added living space and light into the attic story and provide an opportunity for the architect to design distinctive front elevations. The chimney also rises along a side elevation, and again provides an opportunity for creative designs frequently done in brick or stone.


These were the housing prototypes of yesterday's Detroit. But today's Detroit struggles with how to reinvent itself. With huge swaths of land sitting vacant, how should the City rebuild itself? Even more importantly, what types of architecture will complement efforts to rebuild community? 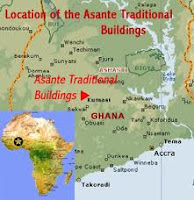 Thousands of mile away, in the African country of Ghana, one can find the few remaining remnants of an ancient building tradition. Though its examples are few, attempts to preserve the forms and decorative motives of traditional Ashanti architecture continues since the early 1960s. The tradition provides an African example of how to intergrate building design with the community of people who use them.

The best examples exist around Kumasi in central Ghana. This was once the capital of the great Ashanti Empire that ruled independently from 1670-1896. The surviving buildings are today typically used as religious shrines. The buildings consist of four rooms around a quadrangular courtyard. Three of the rooms (those for drumming, singing and cooking) are open, while the fourth (the actual shrine) is closed to all but the priest and his assistants. The inner courtyards are usually littered with fetishes (objects believed to have magical powers).

The buildings themselves traditionally have steep thatched roofs. Their lower walls are painted orange/red, and the upper walls are whitewashed. The walls are formed from clay or surface loam soil mixed with water and kneaded to a malleable consistency of 9"-10" in thickness. Over this base layer, a final layer about 3"-4" thick is formed to allow mural decorations to be directly carved into the walls.

These traditional "Adinkra" symbols represent the key characteristic of Ashanti Architecture. These symbols are extensively use in not only their architecture, but also fabrics and pottery. Each symbol conveys a distinct meaning, many linked to traditional proverbs. Fifty-three were recorded by Robert Sutherlan Rattray in his book, Religion and Art in Ashanti, published in 1927.

For me, the lesson to be learned from Ashanti architecture is how well these symbols, embedded in its architecture, connect the building to the people living within it. The designs are not only art, but also literally speak to the user. What better way to connect the architecture with the people who use it?

My suggestion is not to say that in Detroit we build new housing with painted Ashanti symbols (graffiti has already accomplished this), but that we must find ways to connect whatever we build with the people who use it. For African Ashanti builders, their connection was through symbols. As Detroit explores new building patterns, weaving new with old, finding new uses for vacant land, it must connect with its people. They must buy into the notion that this new vision is a benefit to them. It's essential that the architecture compliment the need to build community and directly connect with its users. Perhaps it's a Hip Hop style of architecture as explored by Professor Craig Wilkins of the University of Michigan or a Prefabricated Architecture as explored by Kieran Timberlake Associates. If a building revival is to begin for Detroit, it must find a similar manner to connect its buildings to its people.
Posted by Robert Saxon, Jr. AIA, LEED AP at 9:18 AM